More than 100 visitors from the Chicago, Madison and Milwaukee areas showed up for the “Perseid Meteor Shower” Star Party at White River County Park near Lake Geneva from 8:30 to 10:30 p.m. Aug. 12.

Nine students and volunteers from GLAS Education set up a meteor viewing area in the park along the banks of the White River near the park’s hiking trail.

Two telescopes were also set up on a nearby hill where visitors were able to get a view of Jupiter.

At the check-in tables, students Jaidyn Catherall and Meylanna Arreola-Quiroga who are part of GLAS’s Lake Environment Night Sky Sensor (LENSS) project provided visitors with information about GLAS’s participation in the Dark Skies Initiative, an international nonprofit effort to reduce light pollution  and allow the stars to shine through the night sky.

Even as they prepared for the celestial show, volunteers also took pandemic precautions into account. All volunteers wore masks. Visitors’  temperatures were taken at the check-in table with forehead sensors.  And while not required, most visitors seemed to prefer facial coverings.

Adam McCullough of GLAS said the telescopes were fitted with clear plastic eyepiece adapters  which were easily disinfected between viewings.

Early visitors were greeted by emergency vehicles with lights flashing. Sheriff’s deputies and fire fighters were engaged in the rescue of some kayakers who spilled into the White River when their kayak overturned.

The young ladies were found safe, although a bit wet, and were reunited with their kayaks and friends.

At 8:30 p.m., McCullough kicked off the party with a brief presentation about the Perseids and the need to keep our night skies dark.

Star partiers settled down with blankets, pillows, lawnchairs and snacks ready to view the night sky. The local mosquitoes rose up from the grass to greet everyone, so repellent was freely shared.

The annual Perseid meteor shower comes courtesy of the comet Swift-Tuttle, which orbits the sun once every 133 years.

Like all comets, Swift-Tuttle is messy,  leaving a trail of dust and debris in its wake as it swings around the sun.

As the earth passes through the comet’s debris trail, some of that dust and debris hits the upper atmosphere. There the small rocks and particles become meteors. Superheated from air friction, they streak across the sky as they burn up about 50 miles above the Earth’s surface.

The meteors  are called Perseids because they appear to come out of the constellation Perseus which is in the northern summer night sky. Perseus was an ancient Greek hero considered noble enough to have a group of stars named after him.

Aug. 11 to 13 is considered the peak Perseid period. The sky over White River County Park was clear and dark, but few of the fiery Perseids were seen.

Many partiers spent time tracking satellites as they passed overhead while waiting for the next meteor streak.

Bob Kaplow of Dundee, Ill., said he saw a green-tailed meteor pass just under the constellation Cassiopeia. A meteor fireball was reported earlier.

Despite the sparse showing, star partiers seemed to appreciate having a night out under a clear summer sky with friends and family  and to enjoy what companionship is possible in this time of social distancing.

The low meteor count may have been the result of timing. While the family-oriented star party broke up at 10:30 p.m., experts say the best time to view the Perseids is between 2 a.m. and dawn.

This was GLAS Education’s first Star Party for 2020. The COVID 19 pandemic resulted in the cancellation of earlier events.

The next Star Party, “Autumnal Equinox,” will be 8:30 to 10:30 p.m. Aug. 25 at Library Park, Lake Geneva. Find out where the Earth is now in its annual trip around the Sun as we pass from summer to fall.

Register for the “Autumnal Equinox” Star Party at www.glaseducation.org/star-parties.

Adam McCullough, left, and GLAS volunteer Christy Albrecht shows that it takes a steady and practiced eye to properly mount and steady a telescope.

A pair of well-prepared star partiers pass the snacks during a break from keeping their eyes peeled for passing meteors during the Aug. 13 “Perseids Meteor Shower” Star Party at White River County Park near Lake Geneva.

Adam McCullough, center, and GLAS Education volunteers Griffin Moon, left, and Rowan Danou, wait for the first guests to sign in at the Aug. 13 “Perseids Meteor Shower” Star Party at the White River County Park near Lake Geneva. The sign in table included information about keeping light pollution out of the night skies through the Dark Skies Initiative. 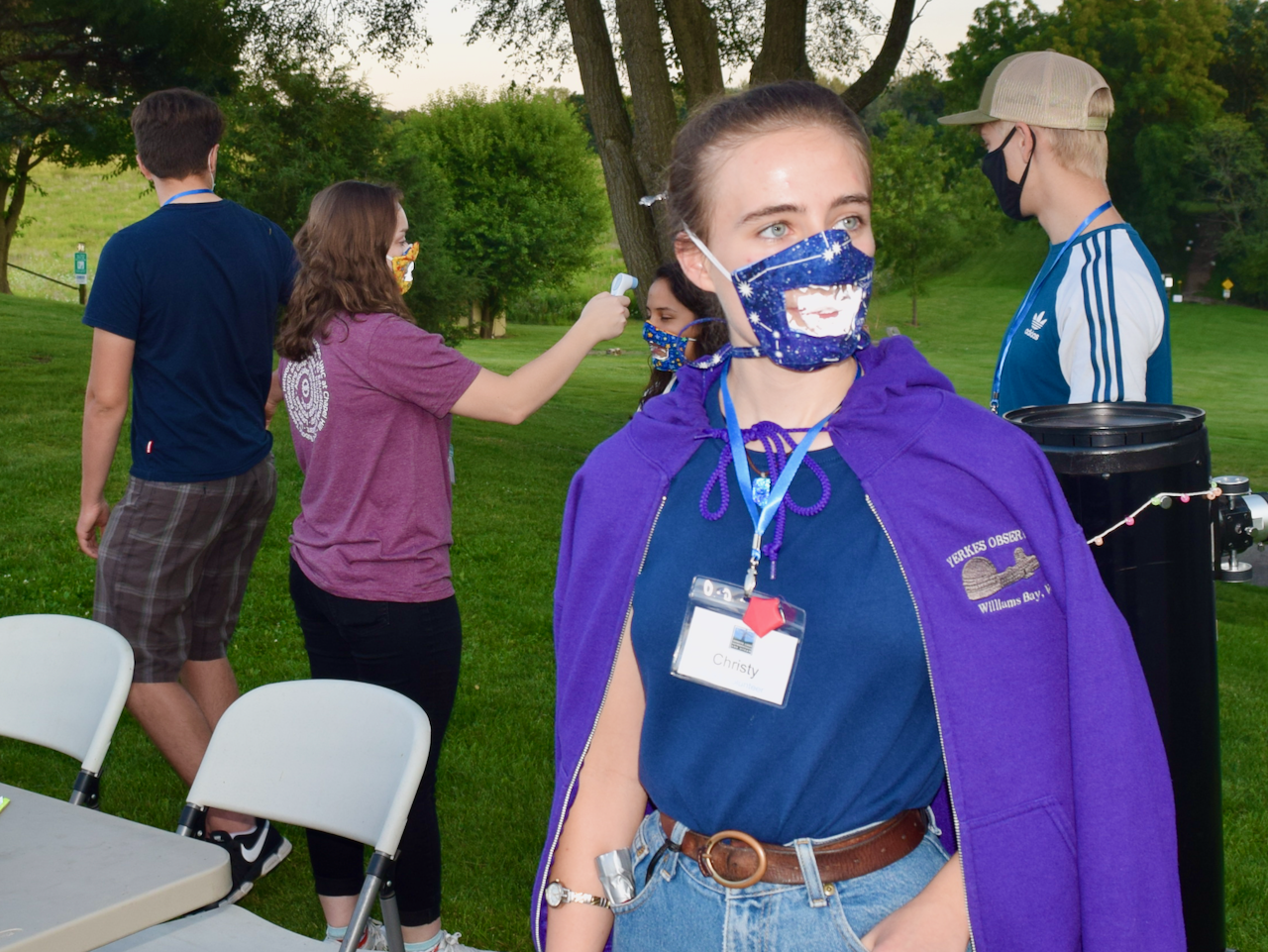 Christy Albrecht wears is masked up for protection while helping to set up the “Perseids Meteor Shower” Star Party on Aug. 13 at  White River County Park near Lake Geneva. Other volunteers, from left, Rowan Danou, Jaidyn Catherall, Melyanna Arreola-Quiroga and Jack Adams were also assisting in the set up.

GLAS volunteer Rowan Danou does a forehead temperature scan of a visitor to the Aug. `13 “Perseids Meteor Shower” Star Party as a part of the event’s pandemic precautions.