The Midwest consortium conference included consortium directors from Illinois, Iowa, Minnesota, Indiana, Michigan, and Wisconsin. Each state has its own space grant consortium organized and financed through NASA to fund projects that advance knowledge in space science. “The overall purpose of the conference was to discuss new requirements and guidelines for grants,” Kate said. During the conference, there were workshops and discussion groups on projects funded through the state consortiums.

“They invited us to speak because we are part of the Wisconsin Space Grant Consortium,” Kate said. “And GLAS is the only one doing accessibility work.” During the workshop, Kate and Katie gave a rundown on the accessibility work that GLAS is doing, including presenting data through sonification and tactile images. They also discussed how groups and organizations can make their events accessible to persons who are blind and visually impaired.

“There are a lot of reasons why accessibility is important,” Kate said. “It benefits a wide range of people. Those who are blind or visually impaired are just as curious about the universe as sighted people.” The challenge is taking visually-oriented data and making it understandable to someone who has never seen a star or a light spectrum. That visual data can be translated into tactile images for persons who “see” by touch. Other information can be conveyed by sound, a process called sonification. Without easy access to information, nonvisual individuals have no way to access essential data and contribute their ideas to the overall scientific conversation. GLAS is involved in an effort to standardize sonification so data can be uniformly translated into aural tones and be uniformly understood. “There is a whole pool of creativity that is lost,” Kate said.

With these new avenues of accessing information, the blind and visually impaired can participate on a level playing field with their sighted peers in learning, researching, and innovating. “It not only provides education, but it also provides resume building,” Kate said. “It helps the blind and visually impaired do the work that they want to do.” What is more, having information in nonvisual forms can also provide new perspectives for sighted researchers. Kate said, “It benefits everybody.” 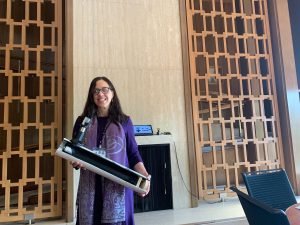